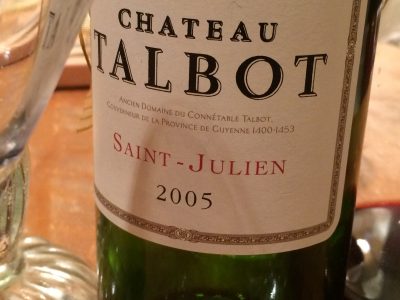 Similar to my post earlier in the year on Bordeaux 2009, this appraisal is based on wines I purchased en primeur, eight 2005s which are all from the left bank. I’ve had a number of other ‘05s in recent years, perhaps most notably Château Latour [rated 100], Château Lafite [rated 98] Château Haut-Bailly [rated 96], Château Léoville Poyferré [rated 96] and Château d’Issan [94]. Clearly, at the very top level the wines are excellent.

I’ve already finished cases of Château La Tour de By and Château Angudet [then d’Angludet] 2005s. Château La Tour de By was vigorous and sappy in its youth and Château Angludet was beautiful between eight and twelve years. Of the 2005s tasted recently, Château La Lagune was completely on-song. This has been terrifically consistent since the very beginning and it is still in top form. It displays layers of wonderfully ripe blackcurrant and plum fruit and is totally seductive.

Next up for me would be Château Talbot. This has taken a while to come around. For the first decade of its life it left closed, not offering up that much at all. All that has now changed. This wine has developed the elegant aromatics one would expect from mature St Julien. It’s complex and refined and will age further.

Two top Pauillacs tasted recently were slight misfires. I’ve had a fair few bottles of 2005 Château Batailley and this has impressed previously but it has been a good five years or so since I’ve dipped into the vintage. This recent bottle was somewhat rustic and backward and very dry on the palate. Some bottle variation here though I think it may also have been marginally corked. Next up was Château Duhart Milon. I’ve had this recently [2018] and it was more impressive than the bottle tasted in March this year. It felt very backward and unyielding. Perhaps this wine has crept into a dormant phase, so if you have any in your cellar, I’d not rush to open your bottles just yet.

Château Cantemerle 2005 has never really hit its stride in my book. I’ve now the remainder of a case and the more recent bottles have felt angular. There is structure and tannin, but the fruit has dipped and I don’t really see this wine getting any better. In stark contrast, Château Belgrave is really showing well now and provided much joy. There is plenty of extract here and it has the structure and fruit to age further. It knocks Cantemerle out of the park. Belgrave goes down as one of the vintage’s bargains for me.

Below are the detailed notes on the wines tasted earlier this year. Again, it’s a small sample, so difficult to draw significant conclusions, other than to look at the relative successes of the different properties tasted. On that basis, anyone considering this vintage should certainly seek out Château La Lagune, Château Belgrave and Château Talbot.

Deep core; earthy red at edge; not hugely aromatic but has warmth; nice depth on the palate; some ink; texture and soft tannins. Solid but not complex. Tasted March 2021. Drink now. 85

Deeply coloured; earthy red at edge; hint of brown; dark core; lovely rich wine aromatically; roast meat, lardons, earthy blackcurrants and leather notes; camphor too; lovely texture on the palate; lots of matter; freshness and life still; tannins rounded on the finish but this is a super wine that has developed really well. St Julien in all but name stylistically. Might gain further complexity over the next 2-3 years but will remain on a plateau for a decade at least. A superlative ’05 and a bargain. Tasted March 2021. Drink now – 2025. 92+

Dark; legs; red at edge; rather dusty and unyielding nose; solid on the palate without a huge amount of charm or fruit; I’ve had this several times over the years and this has always felt an austere Cantemerle a property which in the best years [2009 and 2010] has great charm and seduction and feels very Margaux-like. The 2005 has not developed that well in my experience, though I’ve wondered if this was poor storage on my part. Tasted March 2021. Drink now – 2023. 86-87?

Deep; red at edge and still opaque at core; beautifully voluptuous creamy aromatics; still some pain grillé tones; blackcurrants, plums – very deep and spot on: I’ve had this wine several times over the years from this vintage and it has never disappointed; this is drinking fabulously now; layers of fruit; some pencil shavings and tobacco notes developing; glossy and rich overall; really caressing on the finish; has structure and plenty of depth; menthol and black fruits on the end. Terrific wine. Tasted March 2021. Drink now-2030. 95

Deep at core; legs; earthy; red at edge; lovely smoked meat and spicy blackcurrant aromatics; some tobacco; this is really developing well; palate is meaty and savoury; mid weight with excellent texture; tobacco and lapsang tea notes on the finish; this opened up wonderfully in the decanter; notes of tar and asphalt along with more blackcurrant tones alongside the savoury notes; nicely balanced and fine St Julien. Tasted March 2021. Drink now-2035. 93

Deep at centre; still very dark looking; red at edge; dumb at first; very reticent; faint blackcurrant notes emerge; palate is intense with cassis and blackcurrant tones but this wine feels very pent up and not giving much; after a couple of hours in a decanter the wine opened up showing blackcurrants, spices and some tobacco leaf notes; plenty of substance but still rather backward on the palate; feels a bit pinched and angular on the finish but might simply need more time. I’ll give it the benefit of the doubt! Will report again in a few years as I’ve a couple of bottles left in the cellar. Tasted March 2021. Drink 2025-2040. 90