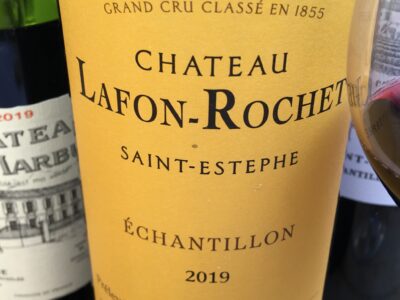 Tasting fourteen wines from St Estèphe shows just what a wonderful vintage this is for many properties here in 2019. There is plenty of lush fruit on offer and these are wines with lots of extract, big, ripe tannins and considerable alcohol. I have already posted on Château Cos d’Estournel and Château Calon Ségur, which have both produced brilliant St Estèphe. I was also struck by the quality at Château Lafon Rochet, which has produced a wine of sophistication and class in this vintage. What great strides have been made here by Basile Tesseron over the past decade – starting with an impressive 2009. There are excellent wines to be had from Château Meyney and Château Haut-Marbuzet too. Both have produced typically concentrated St Estèphe in 2019 and are definitely worth seeking out. I also enjoyed with offerings from Château de Pez, Château Serilhan, Château Le Petit Bocq and Château Bernard Magrez. They have all produced impressive wine. There is no doubt that 2016 is a brilliant year for St Estèphe. The dry summer and sunny harvest conditions played to the strengths of the terroir here. I’ve already marvelled at the harmony and balance of the wines at Château Calon Ségur, Château Montrose and Château Cos d’Estournel in this vintage, but, as ever, there are a bevy of other wines at lower price points that have produced wonderful red wine. Château Beau-Site, Château Le Boscq, Château Capbern, Château Le Crock, Château Domeyne, Château Haut-Marbuzet and Château Meyney, to name a few, have all made excellent wines. St Estèphe is really an appellation to seek out in 2016 [as in 2014 too]. It is also one of my favourite Bordeaux appellations.